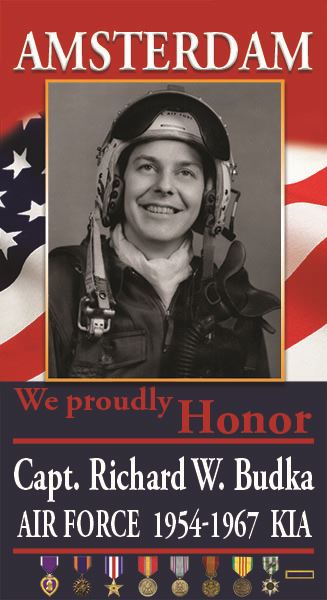 Captain Richard Budka was born March 11, 1932, in Amsterdam, NY to Walter and Bernice Budka. His older sister, Dolores (Fabozzi) was his only sibling. Richard graduated from Wilbur Lynch High School in 1950 and went on to earn his pre-med degree at Union College, where he had also enrolled in the Schenectady school's ROTC program. Commissioned as a Second Lieutenant upon his graduation from college, he enlisted in the U.S. Air Force in 1954 and went to Flight School. Before getting sent to Vietnam, he had served tours of duty in both Japan and Korea. On Christmas morning in 1967, U.S. Air Force Captain Richard W Budka found himself co-piloting an O-2 Jet on a recon mission in Southeast Asia.

Showing extraordinary heroism in military operations against an opposing armed force as a Forward Air Controller and co-piloting an O-2 Pilot of the 20th Tactical Air support Squadron, DaNang Air Base, Vietnam, Seventh Air Force, in action near Con Thien, Republic of Vietnam, on December 25, 1967.

On that date, while flying a night reconnaissance mission, they received a call for assistance from a United States ground patrol. This patrol had been attacked by a superior hostile force and was in imminent danger of being overrun. Weather and terrain conditions made target acquisition virtually impossible and the decision was made to turn on the lights to locate the target. The aircraft was immediately bracketed by antiaircraft fire. They then attempted to direct an AC-47 gunship to the area from which fire had been received but the pilot could not see the target. Without hesitation and concern for their own personal safety, they illuminated the target with landing lights and directed accurate fire into the hostile positions. The aircraft was struck by hostile fire and crashed. By deliberately being exposed to the hostile fire, they enabled the patrol to be withdrawn, ultimately saving their lives by the sacrifice of their own.

Captain Richard W. Budka's body was recovered by Allied forces eleven days later, Captain Budka returned home to Amsterdam, NY one last time. After funeral services with full military honors, Captain Budka was taken to Arlington National Cemetery for burial. We honor him today for his bravery, his service, and the supreme sacrifice he made on behalf of his country.

Richard Budka was a vibrant, good-looking, highly intelligent young man. He was not just a soldier, but an honor student, dutiful son, best younger brother, and devoted uncle to his only beloved nieces Pat Wagner and Cindi Fabozzi. Earlier in his career, when he was deployed in Japan and Korea, he faithfully wrote letters to them describing the foreign places he was stationed at. He sent gifts to his mother and sister from the Orient and loved fishing and camping out with his father and sharing stories with his fellow airmen. Richard flew a flag overseas and sent it to Cindi for her elementary school to display. He was that kind of son, brother, and uncle. He was the best and most honorable kind of man.

Captain Richard W. Budka had 12 years of service in the United States Air Force and served in combat for 225 days. His life ended on that fateful Christmas morning, thousands of miles away from Amsterdam, NY. As his jet taxied down to the runway on Christmas morning in 1967, Captain Budka had just 25 days remaining on his Vietnam tour of duty.