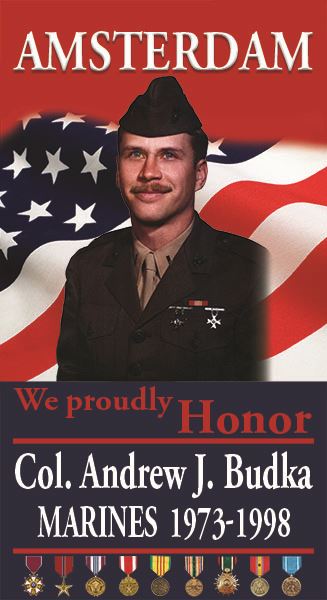 Colonel Andrew J. Budka USMC is the son of William and Claire Budka. Born and raised in Amsterdam, NY he is a graduate of St. Mary's Institute and Bishop Scully High School, class of 1969. He earned a Bachelor of Arts in Geography from the University of Kansas at Lawrence and his Master of Arts in National Security and Strategic Studies from the U.S. Navy War College in Newport Rhode Island. Colonel Budka proudly served for 25 years in the United States Marine Corps, where he participated in Operation Desert Storm for which he received the Bronze Star, Operations Desert Shield, and in Mogadishu Somalia. He served as a Middle East and Counterterrorist analyst at the Pentagon, as an Intelligence Staff Officer of several Marine Corp Regiments and Divisions at the U.S. Central Command in Tamp Florida; as the Commanding Officer of a Marine Detachment aboard the USS Albany (GG-10)and as Chief of Staff of the United States Military Training Mission (USMTM) to the Kingdom of Saudi Arabia, where he was also an advisor to the Royal Saudi Navy and Marine Forces. He is currently retired and resides with his wife of 41 years in Huntsville Alabama.