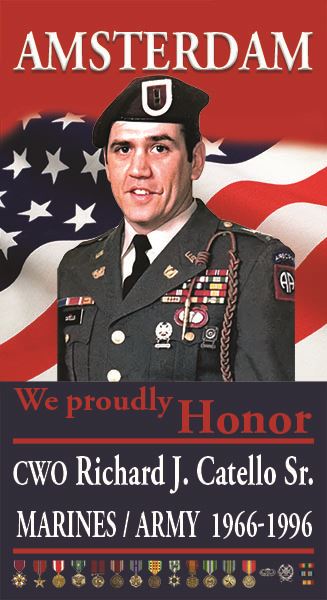 Richard J. Catello Sr. served in both the United States Marine Corps from 1966 to 1970 and United States Army from 1970 to 1996. As a Marine, he served in the First Marine Division, Second Marine Division, and the Third Marine Division Fleet Marine Force Western Pacific. While serving in the Third Marine Division he was assigned for duty in the Republic of South Viet Nam 1967-1969 in the Northern I Corps area on the DMZ and participated in over thirty Combat Operations and the Tet Offensive of 1968 against the Communist North Vietnamese Army was awarded the Navy Commendation Medal with the Combat Valor ("V") device, Combat Action Medal, Presidential Unit Citation, Meritorious Unit Citation, U.S. Marine Corps Good Conduct Medal, National Defense Medal Vietnam Service Medal, Republic of Vietnam Cross of Gallantry and the Republic of Vietnam Campaign Medal. He also was promoted to the rank of Staff Sergeant prior to his discharge in 1970.

Shortly after his discharge from the U.S. Marine Corps, he enlisted in the United States Army in 1970. He volunteered and returned for his third tour of duty in Vietnam serving in Cam Ranh Bay RVN with the 24th Transportation Command 1971-1972 and was awarded this first Army Commendation Medal for meritorious service. After his return from his overseas assignment, he re-enlisted again and volunteered for his fourth tour of duty in Vietnam from 1972 to 1973 with an assignment to the 716th Military Police Battalion in Military Assistance Command Vietnam in Saigon, RVN, and was awarded the Bronze Star Medal for Meritorious Service. The citation reads "By the direction of the President of the United States, Staff Sergeant Richard J. Catello, United States Army who distinguished himself by meritorious service in connection with military operations against a hostile force in the Republic of Vietnam during the period of 1972-1973. He consistently demonstrated exemplary professionalism and initiative in obtaining outstanding results. His rapid assessment and solution of problems inherent in a combat environment greatly enhance the Allied effectiveness against a determined and aggressive enemy. Energetically applying his sound judgment and extensive knowledge, he has contributed materially to the successful accomplishment of the United States mission in the Republic of Vietnam. His loyalty, diligence, and devotion to duty were in keeping with the highest tradition of the military service and reflect great credit upon himself and the United States Army.

Upon his return from Vietnam, he was appointed to Grade Warrant Officer and immediately assigned to the Third Armored Division in the Federal Republic of Germany from 1975 to 1977. Other major assignments include duty in the 82nd Airborne Division, Fort Bragg, NC from 1977 to 1980; a second tour of duty in the 3rd Armored Division, FRG from 1980 to 1982; U.S. Forces Command, Fort Devens, MA from 1982 to 1984; 2nd Infantry Division on the DMZ in South Korea from 1985 to 1986; USA Personnel Command Pentagon Alexandria, VA from 1986 to 1990; and final assignment to the Department of Civil and Mechanical Engineering at the United States Military Academy, West Point, NY from 1990 to 1996 where he was promoted to the grade of Chief Warrant Officer Five U.S. Army, and upon his retirement awarded the Legion of Merit medal for his distinguishing himself by exceptionally meritorious service throughout a career of more than twenty-six years of active duty in the United States Army. Additionally, Catello holds the following medals, five Meritorious Service Medals, two Army Commendation Medals, Army& Marine Good Conduct Medals, Army Achievement Medal with Oak Leaf Cluster, Vietnam Service Medal with 12 Battle Stars, Vietnam Campaign Medal, Vietnam Cross of Gallantry, Armed Forces Military Outstanding Volunteer Service Medal, Combat Action Ribbon, National Defense Ribbon, Army Service Ribbon, Army Overseas Ribbon, Paratrooper Badge, and various unit commendations. Also, he received the Amsterdam Veteran Service Medal.

After his military retirement in 1996, Chief Warrant Officer 5 Richard J. Catello (Retired), was employed for another 18 years as the Support Group Director, for the Department of Civil and Mechanical Engineering at the United States Military Academy at West Point until his retirement from civil service in December 2014. Upon his retirement from civil service, he was awarded the Department of the Army Meritorious Civilian Service Award for his meritorious performance of duty.