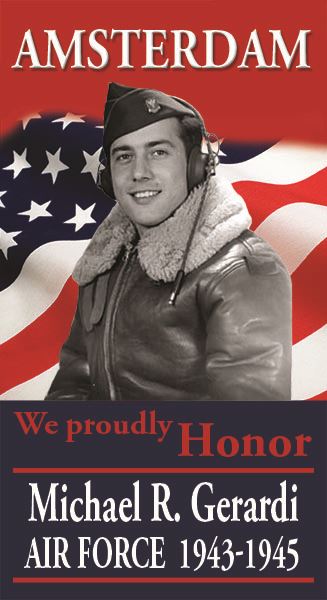 Mike Gerardi was born in Amsterdam on May 20, 1921, the fifth child of Frank and Amelia Gerardi. He graduated from Amsterdam High School in 1939. After working at Mohawk Carpets, and then helping build army tanks at American Locomotive, he enlisted in the U.S. Army, and served as a combat cameraman with the 5th Army Air Force in New Guinea and the Philippines, achieving the rank of Sergeant and earning a Purple Heart. After the war, Mike spent several years in Southern California, then returned to Amsterdam, where he met and married his wife, Eileen Suriano of Schenectady in 1958. Mike and Eileen then moved to Huntington Park, California, and had three children, Michael, David, and Maria. Mike worked for Greer Hydraulics until his retirement, and in 1997 moved to Menifee, California. After his time at Greer, Mike traveled extensively. His travels included cruises with Eileen, and trips with his sons to Japan, Australia, China, Thailand, Paris, and other destinations. He also was the guest of honor at the 2007 Gerardi family reunion, held in Amsterdam. After Eileen's passing in 2005, Mike continued to live in Menifee with his son Michael, until moving to San Clemente, California, where he now lives with his daughter Maria Locicero. Mike has five grandchildren (Maria's children Sterling and Tiara, and David's children Matthew, Lisa, and Leslie).