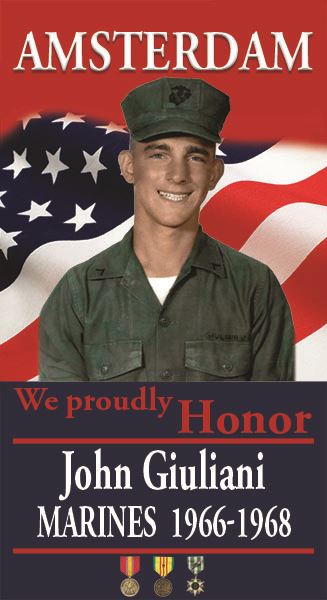 John Giuliani graduated from Amsterdam high school in 1963 and attended Fulton Montgomery Community College. He entered the US Marine Corps in February of 1966 receiving basic training at Parris Island, South Carolina, followed by advanced combat training and Vietnamese Language studies at Camp Geiger, North Carolina. John arrived in Vietnam in December of 1966 and was assigned to I Company 3rd Battalion. While recovering from a shrapnel wound, he volunteered to join the Marine RECONDO training and was reassigned to Company A, 3d Recon Battalion, 3rd Marine Division. He was assigned as Fire Team and squad leader. During his remaining tour in Vietnam, he participated in 14 operations, the majority of which were reconnaissance squad operations in the vicinity of Khe Sanh, Phu Bai, including numerous counterinsurgency operations.  After these operations, he was promoted to Corporal. For his service, he received the National Defense Service Medal, Vietnam Service Medal with one star, and Vietnamese Campaign Medal with Device 60-.